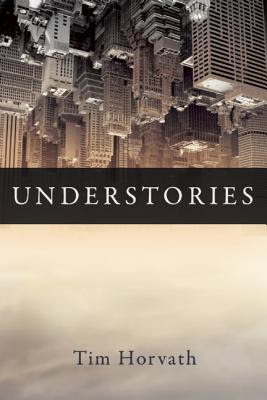 "It was the comfort of your tongue tripping on your own sweat, a friendly reminder that of the world's salt, a share is yours." (p. 14, Circulation)

The back jacket copy is what compelled me to request Tim Horvath's Understories from the May Early Reviewers batch on LibraryThing:  "What if there were a city that consisted only of restaurants? What if Paul Gauguin had gone to Greenland instead of Tahiti? What if there were a field called Umbrology, the study of shadows, where physicists and shadow puppeteers worked side by side.  Full of speculative daring though firmly anchored in the tradition of realism, Tim Horvath's stories explore all of this and more, blending the everyday and wondrous to contend with age-old themes of loss, identity, imagination, and the search for human connection. Whether making offhand references to Mystery Science Theater, providing a new perspective on Heidegger's philosophy and forays into Nazism, or following the imaginary travels of a library book, Horvath's writing is as entertaining as it is thought provoking."

As a collection, Understories was a bit uneven.  Not all of the stories seemed like they belonged in the same book.  That said, there were more than a few that stood out to me as really quite good:

In between many of the stories were short pieces entitled Urban Planning, created I imagine to weave the stories together into a cohesive collection.  A couple of these, particularly Case Study Number Six and Case Study Number Eight, were delightfully strange taut little mini-stories and would have worked out of the context of the greater collection as well.

Horvath's strength is absolutely concept:  he imagines places and scenarios, and "what ifs" himself into the most interesting premises.  To be a fly on the wall in that man's imagination...which also sounds like a plausible premise for one of Horvath's stories...

One thing I did notice is that Horvath does have a tendency to use several words where one would suffice, so if economy of word is your thing, he might not be the right writer for you to explore.

I have no idea why, but my reading has tended toward the dystopian/surreal/ speculative/downright bizarre lately.  Just wait until I share with you my thoughts on Blake Butler's There Is No Year... I'm beginning to have some really strange dreams, and I absolutely blame Butler...I think it might be time to crack into Anna Karenina and The Dud Avocado!
Posted by the brunette bibliophile at 7:00 AM

in case you were wondering...

What I'm Reading on the Interwebs

More of The Brunette Bibliophile's books »